Two in a row for the Ladies 2nds! 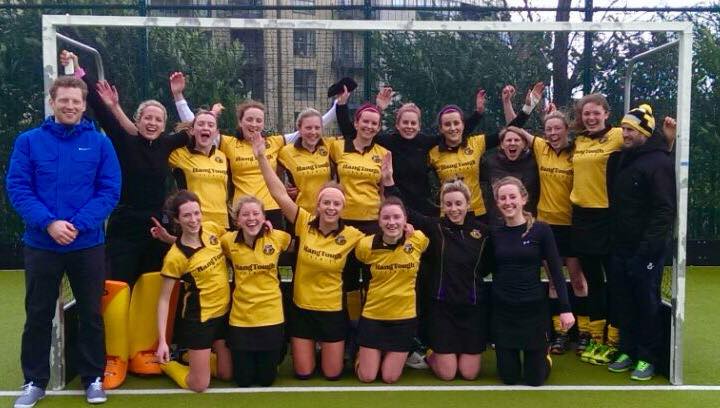 After the disappointment of the previous day, the team reconvened in Milltown on Sunday seeking one final point to secure their second league title in row. After a season-best team talk from Paddy, the girls were psyched and ready to go.

Despite the rain, it was a fierce contest between the two sides, Old Alex put in a competitive strong performance. The result could have gone either way.

Pembroke started strong with a solid opening 10 minutes, which saw them put right the errors from the day before. But Alex fought back with good passages of play with their greatest success coming from the sideline channels. Neither side had clear cut chances but had enough possession in the opposing circles to look threatening. But the first half wasn’t uneventful with the umpires awarding the Pembroke with a captain’s green card for the unofficial umpiring from the Pembroke bench. This saw Fiona O’Donovan watching the match from the corner for two minutes.

With a level-headed halftime talk from Moss and Paddy and copious jellies to restore the energy levels, the second half started. The second half was much like the first competitive and too close to call. Both Alex and Pembroke had opportunities to collect the three points on offer, with the best chance falling to Alex, which they blasted high and right of Pembroke’s right post. Pembroke created scoring opportunities with two short corners, which failed to be converted.

Despite some dubious umpiring decisions, it looked like it was going to finish all square but with 52 seconds left on the clock, Alex were awarded a short corner which saw Ciara Howard forced to retire from the game with a heavy knock. But with a great defensive effort from Maebh Faherty in the defensive penalty corner, Alex failed to convert.

The draw gave Pembroke the point they needed to win Division II with one game to spare and out of reach of close rivals Muckross. The competitive nature of the game against Old Alex will put the IIs in good stead for their upcoming ICJ semi-final against Belfast Queens on April 18th.