Wins all round for the Ladies 2nds, 3rds, 4ths and 6ths 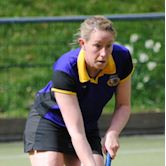 4 wins and a draw from 7 games was a good return for Ava Cooper’s Ladies last weekend, with the 2nds, 3rds and 4ths continuing their early season form. The 5ths remain well in the mix in their division following a draw away to UCD 4ths. The Ladies 1sts beat North Kildare away in a friendly – they sat out the Irish Senior Cup 1st round via a bye – they will face Corinthians at home in the next round on November 24th.

The Ladies 2nds fared well against Hermes 2nds in a top v bottom table clash at HQ. With Mick O’Connor up north for ISC Ronan Flannery was left holding the reins as coach for the day. The game started at a high tempo. Pembroke were not ready for the intensity of the Hermes attack, and the home side made a number of unforced errors in the early minutes. Despite being unable to play their usual style of game it was Pembroke that opened the scoring count. Viv Fenton dodged numerous tackles and found Susan Ryan at the top of the D who spun and shot with precision into the bottom corner.

Hermes responded almost immediately, taking a fast free from the dotted line and catching the Pembroke defence off guard. The ball was drilled towards the penalty spot and although Lisa O’Rourke in goals got a touch to it Hermes followed up well and levelled the game at 1-1. Shortly after Fiona O’Donovan played a beautiful disguise pass down the left for Emma Keilthy to pick up on the 25yard line. In a superb solo effort, Emma drove the baseline and rolled the ball in front of the goal for Holly Jones to tip in. Again, Hermes came straight back, running onto a poorly played ball out of defence for a 1 on 1 with the keeper.

The game went to half time level at 2-2. Some words of advice from ‘Coach Flanners’ seemed to the do the trick however, and a more composed and controlled Pembroke team lined out for the second half. The forward pressure was rewarded with a corner shortly after the re-start and Shona Doyle produced the goal celebration of the season when she broke her recent scoring drought and deflected the ball into the goal to go 3-2 up. She continued to cause havoc for the Hermes defence and increased her tally to two from play soon after that.

Susan Ryan closed out the scoring at the end, deflecting a ball upwards which hit the crossbar and dropped down for her to finish off on the second go. Final score 5 – 2 to Pembroke and continues their unbeaten run in Division 2.

The Ladies 3rds faced off against a strong Corinthians side last Saturday. Corinthians started strong and took control of the match initially, winning 2 short corners early in the first half. Luckily, both shorties were saved and cleared efficiently. Corinthians had several shots in the opening half, but the Pembroke defence were able to repel the attacks, creating some shooting opportunities from possessional turnover. In fact, the first goal came as a result of a great turn-over in defence. After some brilliant passing between the mids and forwards a short corner was won. Annie showed great composure at the top of the circle to pass to Sarah McGready who calmly and precisely slotted home the first Pembroke goal.

The second-half saw a slight improvement in the Pembroke performance, with better marking and a more disciplined press. Corinthians also came out fighting, however, and Pembroke had to work hard to break-down their attacks. Like the first goal, the second seemed to miraculously come from nothing. Another example of some intelligent quick passing, transferring play from left to right and some two touch passing saw Rachel McGrath slot home the final goal, thus claiming our third win of the season. Overall, the Pembroke performance was scrappy at times, but we secured 3 points nonetheless.

The Ladies 4ths took on UCD 3rds in a top of the table clash last Saturday. Knowing this was a must win game, both teams came out with a fighting spirit from the starting whistle. UCD dominated the first 10 minutes of the game, putting our defence under pressure, however once Mossie’s 4’s had settled into the game, it was clear that they were playing for the win! Ash Sherriff worked hard in midfield, as did Elaine Thompson, great skill and pace from the two of them left the forwards job more enjoyable with Rachel Breen finding herself dominating the UCD circle in the first half, but it was Lou Monahan’s battle with the goalie and two defenders that made it 1-0 to Pembroke.

Coach Mossie, had his own team commitments to attend to, so it was Pete Priestly who had the task of firing up the 4’s come half time. His motivational words of wisdom, left the all of the girls hungry for more goals in the second half. With a fired up Pembroke team out for a win, all midfields and forwards worked hard to dominate the first 20 minutes of the second half, however our defence was put under serious pressure in the last ten, Sara Raymond, Heather Yanusus, Emily Rice and Maeve Farrell all had their work cut out for them when UCD managed to win 6 short corners. Our defence were committed and Maeve Farrell showed this when she took a ball to the face when running out on a short corner. Her commitment resulted in 3 stitches, she said it was well worth it though! With an impeccable defence, the game finished in a mighty 1-0 win to Pembroke. The Ladies now hope to continue their winning streak right till the very end.

It was a physical and tactical stalemate for Ladies 5ths against UCD on Saturday. With some significant faces missing from the squad, the new recruits more than acquitted themselves with a sound performance against a young, energetic and enthusiastic UCD side. After conceding an early goal the team fought back to level the scores through Captain Lydia Coleman. However UCD managed to sneak another late goal in the first half leaving the Pembroke Ladies plenty of hard graft to put in the imminent second half.

After an inspiring and passionate teamtalk from team Coach Dave Loughrey, the girls renewed their second half effort with incredible determination. After numerous close exchanges it seemed the Ladies unbeaten run was slipping away from their grasp. However, commeth the hour, cometh the Girl and with minutes to go Captain Coleman struck again to level the score. The Ladies defended bravely and with the final whistle held on to their undefeated record. An epic performance from a truly unshakable team and one which was repeated that night at the Clubs Halloween Social. Well done Girls!

The Ladies 6ths took on Old Alex in Milltown on Saturday. Right from the go it was an enthusiastic game with good pace. The defense, with help from Ava, worked hard throughout and Louise Lacey’s return was a great addition. Despite Alex being dangerous on the break Liane Gourlay eventually managed to put a goal in the back of the net! Great 1-0 win which leaves the 6ths sitting in 4th place with a game in hand on the teams above.

The Ladies 7ths had a difficult task away to Div 9 Leaders Botanic – whose class showed in the end with a 3-0 win. The Ladies 8ths, shorn of players, took on Bray, out in Bray. The team was bolstered at the back by a much anticipated appearance by Barbara ‘Babs’ Tracey. Solid in defense. Although we battled hard we were came out on the wrong side of the result. Great goals from Aishling Schutte. End result 5-2.

Thanks to everyone who supplied match reports!! Please send your photos to web@pembrokewanderers.ie and keep tweeting!