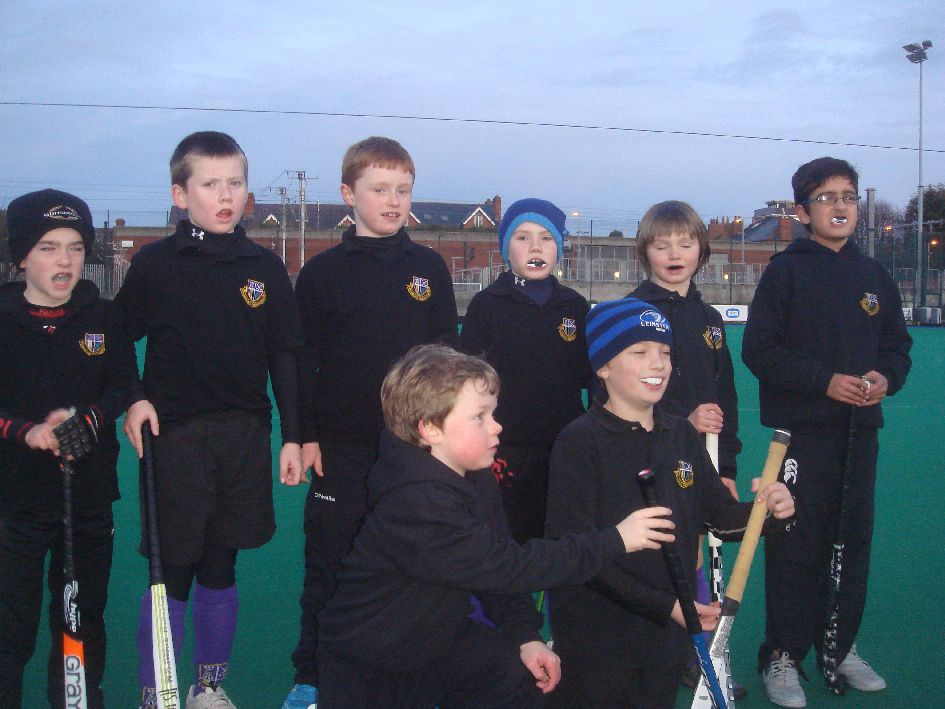 Sunday 11th December 2011– remember the names Alec Bernie, Cian Harrington, Shane Hughes, Alex Keyes, Andrew Maguire, Sahir Mangat, Henry Thompson and Mitchell Thompson. On a cold Sunday afternoon two of our boys under 10 teams played in the Pembroke Wanderers tournament. This is the only club tournament where medals are awarded to the winners and runners up in each section. The boys had all been training really hard all season and all had grown in confidence and knowledge of how to play exciting attacking hockey.

The under 10 boys had never got to the final of this tournament so they were determined to do their very best. The A team had to play Monkstown, TRR, Corinthians and YMCA in their group and the under 10 B team had to play Enniscorthy, Wicklow, Railway Union and Avoca. The B team had some very young and talented boys who will be able to play again next year for the U 10s—watch this space. The boys playing for this team were Eoin Harrington, John Buckley, Ronan Byrne, Alex Greene, Andrew Kellet, Louis McCabe, Ferninand Beier and Matthew Moloney. The B team had to play against other Club A teams and performed really well, playing against older players with more experience. They improved in each match they played and never gave up. [dt_fancy_image type=”image” image=”https://pembrokewanderers.ie/wp-content/uploads/2013/10/u10-boys.jpg” image_alt=”Boys under 10′s take Tournament top spot” lightbox=”true” style=”2″ width=”400″ padding=”10″ align=”right” animation=”bottom”]

The A team’s first two matches were against the clubs who normally win the tournament Monkstown and TRR, the boys played exceptional well in these matches. The tigerish midfield of Mitchell Thompson and Eoin Harrington were exceptional putting pressure on the opposition constantly. The A team won these two matches 3 -nil. The defence were busy all during the tournament however with Alec Bernie and Sahir Mangat at the back the opposing teams were always going to have tough day trying to break them down, the concentration and effort put in by these boys was immense, only conceding one goal during the whole tournament. Up front we had youth and fitness in abundance all the boys playing up front were only eight years old Henry Thompson, Shane Hughes, Andrew Mcguire and Alex Keyes. These boys worked tirelessly and caused all sorts of problems for the opposition apart from scoring goals they worked back to defend when needed.

The A team played a strong Corinthian team in their third match it was very important that the team kept concentrating and they knew how important it was to keep passing and moving the ball around. The team won this match 4-1 again playing wonderfully crisp flowing hockey. Now with one match to go the boys all knew how close they were to achieving history by qualifying for the final.
The final pool match was against YMCA who packed their defence and were difficult to break down, however the boys didn’t panic they kept their shape and played very controlled hockey. Mitchell and Cian played some wonderful balls into the danger area with Andrew Mcguire adding a couple of goals to his tally. The boys won this match 5-nil.

This was it, the team had achieved so much; we now knew we had progressed to the final. The team headed to the changing rooms before the final, all the boys were really excited and were determined to do their very best in the final. After a team talk the boys headed out for the final. You could feel the tension and excitement from the supporters who had been encouraging all day when the boys got onto the pitch for the final.
The final was against TRR HC, who we had beaten earlier in the tournament, however the boys were not going to take anything for granted. The match began with the Pembroke boys passing the ball well and probing the TRR defence, the TRR boys were working very hard to defend. The match opened up with Shane Hughes and Andrew Mcguire causing problems up front for TRR. Mitchell Thompson and Cian Harrington were building on confidence all day and totally controlling midfield. Alec Bernie, Sahir Magnat and Henry Thompson marshalled the defence tremendously frustrating the TRR boys. Fresh legs came on with Alex Keyes and Shane Hughes who again were a constant thorn in the TRR side defence.

The boys worked so hard in the final and won 3 nil. The Pembroke Wanderers boys under 10s were the champions. When the final whistle went the boys were so excited and proud that they were the first Pembroke Wanderers team to win this tournament. Like the good sports men they are they shook hands with the opposition and thanked the umpire, for umpiring the game.

The presentation took place after the final with the A team receiving their gold medals. The tournament was very well organised (Thanks to Brian, Sinead and Ian) and all the boys on the A and B teams who all learnt from the tournament. The boys who umpired were exceptional as well; it is always one of the hardest jobs to do.
Cillian who coached the B team did a wonderful job and all the hard work he has done with the boys throughout the year is really paying off.

I think some of the players on Pembroke Wanderers men’s team better watch out these under 10 boys are very strong players and will be definitely playing men’s first team hockey in a few years time.
I’m sure all the boys slept well last night. Thanks to all the parents who bring their boys training each week and who supported the boys on the day, your children all played wonderfully and were well mannered and showed great sportsmanship during the tournament. Roll on next year.