Club Person of the Year 2011, and news roundup

This year the Executive Committee was in the pleasant position of having a number of people whom we felt was deserving of the Linda Ryan Cup presented each year to the club person of the year. 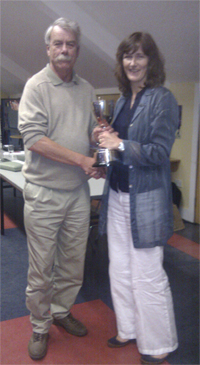 Jim Dundon is this year's Club Person of the Year

But the person we have chosen stood out due to the broad range of activities he undertakes for the club, all on a voluntary basis. He is also an avid supporter and has been seen supporting this season in all corners of Ireland as well as in Eindhoven and Amsterdam.

A lot of the one off jobs he does for the club go unnoticed by the vast majority of the membership, as a lot of it is done during the day. The following are some of the jobs he has assisted with or carried out during the last season, Fixed the locks on the front door, gritted the car park and helped clear snow, erected flag poles, putting sleepers on and building up the bank at the back of the car park, making the new goals and assisting with the pitch line marking.

But his biggest task that he has undertaken for the club has been to organise the non-commercial car parking. With the reopening of the Aviva this season there has been a lot more matches and events where we have been able to run car parks which have been a very welcome income earner in the current financial times. We owe him a huge thanks for all of his work, all of which he does in such a pleasant manner. This season’s Linda Ryan club person of the year is Jim Dundon.

Other news in brief!

Deirdre Mackay officially finished her two year term of Presidency last week when she handed over the reigns to West Thornton at the Club AGM. 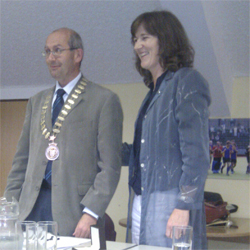 Deirdre has done fantastic and tireless work in the last couple of years, in times where the Club has faced new challenges and difficulties – Deirdre we all wish you a happy and well deserved retirement!
To West and his new team we wish you the very best of luck for the coming season, no doubt West will do a fantastic job. West will be assisted this year by Robert Morgan and Ava Cooper, the new Men’s and Ladies captains who take over from Dave Wilson and Susan Ryan respectively. Best of luck to you both and here’s to a great 2011/2012 season.

Irish U18’s
Big Congrats to Kirk Shimmons who has been selected to travel to Utrecht, Holland next month to take part in the U18’s Volvo Youth Championship 2011. Well done Kirk! Full squad details are here.