Pembroke’ Mens U21 team overcame Monkstown 2-1 in the Final of the Leinster U21 Cup last week. Along the way they had overcome Clontarf, Corinthians and Three Rock Rovers. Coach Dave Loughery reports:

On a very wet and miserable night in Pembroke our U21’s defied the odds to ruin Monkstown’s run of dominance in the U21 Cup – going for 4 in a row.

The team very ably led by Karl Lynch started the stonger much to Monkstown’s suprise who arrived with a large contingent of supporters expecting another win. Much talk had gone on by during the previous days about how their semi final v UCD had already decided the winner.

After a series of lovely passes between our back 4 the ball fell nicely to Shimmons who weaved some magic to earn the 1st corner of the game. A neat switch back to our pusher George Dagg saw him deflect the ball high into the net over Lee Cole on the line. 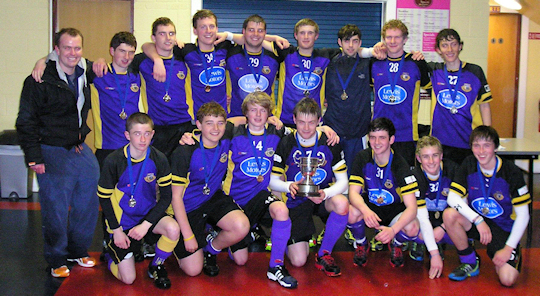 A period of Monkstown pressure forced a number of errors and allowed them to pull level, 1-1.

Monkstown pressure followed for the remainder of the half with keeper Peter Collins making a number of unorthodox saves including a memerable one with his face. Stlyes and Mairtin kept the Monstown play makers at bay forcing them to resort to crash balls and aerials which were easily picked off by our defense.

The second half started with Pembroke pouring forward with Eric and Kirk pulling the strings in midfield and Karl causing general trouble across the park.
Jack walsh had a great effort saved on the line after some great work from Mairtin down right.

With 6 mins on the clock Pembroke won a short which was dispatched with some class by Mairtin Cronin with a stunning deflection high in to the net from a Dave Kane drag. Silencing the Monkstown faithful in the crowd.
5 minutes of constant pressure from Monkstown were stopped at source with some strong tackling Foy and Service and a great work ethic from everyone on the pitch.

I’d like to thank the team for the effort that they all put in. Everyone from 1-16 played a massive part in winning the Cup.