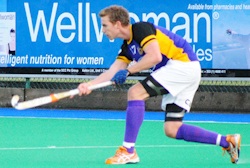 It was like “all our yesterdays” at Pembroke last Saturday 23rd November. The Pembroke Associates Tea Party was held, but before that Pembroke Mens 2nds v Monkstown in the Railway Cup 2nd Round. Ian Clarke in goal for the first time this season behind regular defenders Peter Priestly and Duncan McKeen.

Duncan, fresh from scoring a goal last week against Avoca, the first this season and the archives will need to be researched to ascertain when he last scored were joined by Harry Spain after almost a year out through injury.

Good to see both back playing. Ian will have been delighted with a “clean sheet”! They were joined in the second half by Justin Sherriff, clearly the Player Coach now deciding to play and not only coach, and it was a pleasure to see all involved in the action.

An absolutely wonderful finish from Craig Wilson for the 4th goal following a lovely through ball plus two from Scott Furlong including a short corner These saw Pembroke run out comfortable 5-0 winners over a young and energetic ‘town to cement their place in the next round where they will meet Three Rock in the Qtr Finals.

League wise our Mens 2nds sit top of Division 2 after 9 games – they also beat Raphoe 6-2 in the opening round of this year’s Irish Junior Cup. Draw for the next round takes place on Dec 2nd.