Ladies 3rds back up to third after YM win 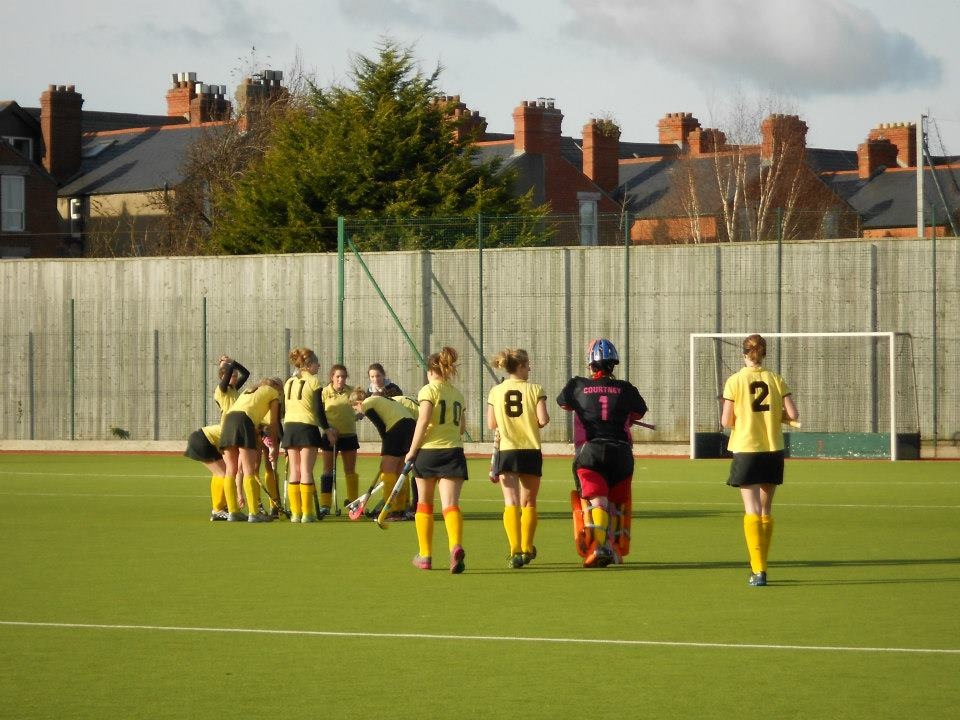 As the blinding spring sunshine finally made an appearance, the ladies 3rds took to the pitch against YMCA. In our previous meeting this season, YM had stunned us with their fast breaks and high ball-pace, gaining a 2-0 victory as a result. Pembroke were determined not to capitulate this time, and the 3rds started the first-half at pace, dominating the early phases of the match.

Lorraine Horgan and Annie Lawlor worked well together in mid-field, their smart passing creating plenty of space for the forwards. Joanna McDonnell proved herself a skilful tactician as she punished the YM defence repeatedly for exposing their feet, winning several free-hits as a result. Holly Jones had an amazing match, as her speed and skill beat the YM mid-fielders, allowing a lovely shot into the D. towards a very composed Fiona Keenan, who calmly turned and smashed the ball past the keeper.

At the restart, YM were determined to pull back. Using their speed and quick-passing they began to poke through the Pembroke defence, winning some short-corners. Luckily, the Pembroke defence was on-form, with Ciara Devane in particular, really putting herself in the line-of-fire (literally). Nonetheless, the Pembroke defence stood-firm and the 1-0 lead remained intact. With most of YM players still positioned in the Pembroke half, Darina Errity secured the ball in mid-field and drove forward indomitably. Darina, finding herself in space at the top of the D smashed the ball towards the goal, only for it to miss the target by millimeters.

The second-half was truly exciting hockey, with end-to-end action throughout. YM were in fighting-form, however, as the game became increasingly more physical. Ironically, Annie Lawlor received a green-card for being on the receiving end of an overly-aggressive tackle. The resulting frustration certainly impacted the Pembroke side, allowing YM ample opportunities to penetrate the PW circle.

Their first shot came as a result of an error in defence, but luckily the shot was cleared by ‘keeper, Steph Courtney. YM followed this up with a flurry of shots at goal, drawing a decent aerial save from the PW ‘keeper. This was cleared on the edge of the D. by Sorcha Ryan, setting up another Pembroke attack.

YM found their way back to the PW circle, however, creating their final and most dangerous play: the initial shot was saved by Steph on the right-post, but YM gathered the clearance on the P-spot, and shot low towards the left corner. The shot forced a diving save from Steph, and the relieved ‘keeper managed to clear the ball for a YM long-corner. Bolstered by the goalkeeper’s performance (she’d like to think, anyway), PW broke down the opposition’s attack, seized the ball and drove towards the YM D. Some smart PW play forced a defensive error and secured a short-corner. Ciara injected the ball and Lorraine took a decisive shot from the top circle that ricocheted off a defender’s stick and into the net.

Pembroke then saw out the match with a comfortable lead. The 2-0 win now puts them in third place on the league table.