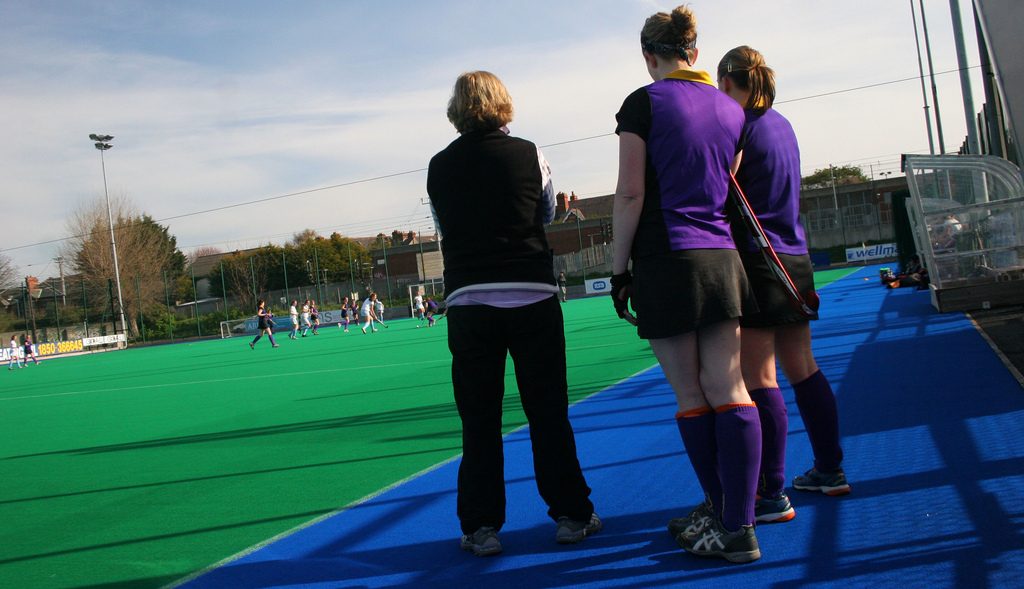 On Saturday the Ladies 3rds travelled Northside to take on Clontarf in the Quarterfinals of the Div 3/4 Cup. Clontarf were certainly favourites based on the team’s league encounter earlier in the season, where Clontarf were convincing 4 – 0 winners. But that then, and this was cup, and the Pembroke Ladies were ready. Fiona Keenan excelled herself in her trademark team pep talk, and with a ferocious call to arms the teams took their positions.
Pembroke started strong from the outset. Within a couple of minutes of the starting whistle the 3rds had broken the steady Clontarf defensive line and were unlucky not to convert. The Pembroke work-rate was excellent, and the forwards and midfield harassed and chased every ball, and forced a number of turn-overs. Clontarf did break the Pembroke circle at one point, but Sorcha Ryan and keeper Sinead Guilfoyle combined for some spectacular tackles & saves to clear that threat.

Rachel O’Brien in midfield tormented Clontarf, and late in the first half she burst out of a tackle and picked out Rachel McGrath, who took the ball beautifully and charged the circle for a one on one with the keeper. Rachel clipped the ball and it bounced over the diving keeper to score Pembroke’s first goal. However, the teams elation was short lived when Clontarf responded with what can only be described as an opportunistic goal, given they only managed two circle entries in the first half. A crash ball from inside the half way line bounced into the circle and a Clontarf player put it in the back of the net. Despite the Pembroke protests that the ball was kicked in, the goal stood, and at half time it was all level. [singlepic id=821 w=420 h=340 float=]Clontarf started the second half at pace, and the Pembroke defence had to soak up a concentrated period of pressure. However espite controlling possession, Clontarf were unable to create anything, and the game began to level out again. Fiona Keenan and Rachel McGrath worked tirelessly up front, and Pembroke forced a number of corners and opportunities from play in succession, but failed to convert their chances.

With just minutes to go it was still all level, and Louise Tolerton at left back pushed up to take a long corner, facing into a wall of Clontarf players. Forced right, she managed to find Rachel O’Brien at the top of circle, but with her back to goal, and Clontarf defenders behind her it seemed unlikely she could do anything. In what looked an impossible move, Rachel danced her way around the Clontarf defence and calmly placed the ball in the bottom right corner of the goal. With 2 minutes on the clock, Clontarf made one last push for an equaliser. They did find their way into the circle, but the ball was crashed wide and the final whistle went, leaving Pembroke as 2 – 1 winners, and through to the semis to the delight of the team, and the Pembroke faithful who came to support!