The last match of the weekend featured the second round clash between Railway Union 4’s and Pembroke 5’s in the Division 5/6 cup. It was never going to be a goal fest, the original fixture was abandoned due to poor light at 0-0 and the previous league encounter also finished 0-0. 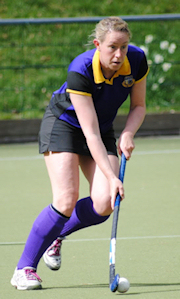 The first half was tightly contested with both sides having several chances which they were unable to convert. Railway started stronger but the Pembroke defence were up to the challenge and counter-attacking from the back with some skillful play from Ellen, Emily, Amy and Julie. From the middle of the first half Pembroke were in the ascendency, creating even more chances – one of the highlights starting with some quick passing between the mids Niamh and Kate, passing through to Jude, on to Alison finishing with a well saved shot from Ash. However it wasn’t until nearing the end of the second half, with the golden goal looming, that a breaking ball fell into space in the Railway 25. Edwina “vice-like grip” Mulcahy struck the ball from the top of the D, took a deflection over the goalie and into the back of the net. The celebration was worthy of a goal but unfortunately it was judged to be outside the circle and disallowed. Pembroke kept up the pressure until the end but the whistle meant it was golden goal time. Extra time also held plenty of chances with the Pembroke and Railway defences managing to keep the ball out of their nets.

Down to the wire and the 5 bravest of the team (Ellen, Emer, Alison, Julie & Ash) volunteered to take the flicks. Thankfully Stef volunteered to go in goals…… In what typified the fixture, the flicks started the same as the game, all square after the first 5, neither side seeming to be able to break the deadlock and it finished 4-4. Ellen confidently took Pembroke’s first flick of the second round, her accuracy equally matched by Railway. Next up was Emer who made sure Pembroke were still in with a chance. Railway stepped up to take their shot, the ball went into the back of the net but unfortunately for Railway, the flick was disallowed and Pembroke could celebrate! Final score 6-5 aet, penalties.

Dave kept the spirits up and Lucozade kept the energy levels high! Thanks to all the supporters who despite the cold and the lack of goals stayed with us until the end. Thankfully it was worth it!

Ladies 6ths miss out on Semi Final spot after 2-2 draw, and flicks
Darina Errity’s Ladies 6ths were extremely unlucky on Saturday in their Qtr Final Cup game away to Loreto. Showing fantastic determination they came back from behind twice and fought hard til the very end. Stunning goals from Clodagh Rigby and Cait Maguire kept Pembroke in the tie. Tatianna and Karen had superb games and overall Player of the Match awarded to Steph Courtney for her outstanding performance (despite already playing for the 4ths and nursing an injured hip!) in goals. Thanks to Jude and Ava for helping out the day before their own big game.