Pembroke Ladies 2nds kick off season in style plus roundup 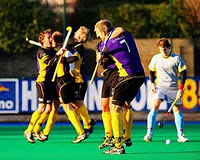 Division II finally got underway last weekend, and Mick O’Connor, in his third season as the II’s coach, put out a much-change squad to face Loreto in the opening game of the season. Featuring three brand new club members, Laura Hanlon, Caroline Murphy and Leinster U-16’s Tara Junghenn, and heralding the return of Shona Doyle and Claire Foley to club hockey after both taking a year out, the team was rearing to go after a what seemed like an eternity of preseason training.

With Loreto taking both the Leinster League and Irish Junior Cup titles from Pembroke’s grasp last year this was always going to be a tough match. Despite Pembroke pouring on the pressure from the start Loreto looked for the counter attacks and were rewarded with the first goal of the game after 20 minutes. Pembroke responded quickly, Eimear Mc Carthy slapping home a short corner to take the game to 1 all at half time.

After the break Pembroke forwards continued to hunt down the Loreto defensive line and they struggled to find a way through looking instead for the long balls which the Pembroke defence picked up easily. Tara Junghenn was immense in right back, and in midfield Laura Hanlon worked well with Rachel O’Brien and Viv Fenton to release the forwards in attack. Goal number two was created by Claire Foley, who sprinted from the half way line to pick up a ball in the bottom corner and lay if off to Susan Ryan, who calmly placed it into the path of Holly Jones to smash it home and take the score to 2-1. The Pembroke work rate was relentless, and resulted in a short corner being awarded close to the final whistle. Anna O’Neill deflected the ball onto the stick of Shona Doyle who coolly slotted it past the keeper to make it 3 – 1. 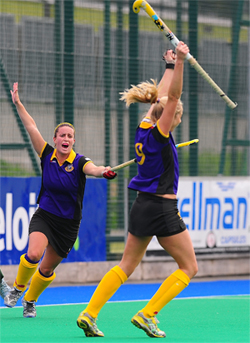 Shona’s back! And she got her name on the scoresheet. Photo: Adrian Boehm

Great result for the opening game of the season. Massive thanks to the usual supporters on the balcony, and a good present for the Birthday Boy Mick O’Connor.

A brief roundup only- please send us your match reports so we can publish them!

The Men’s 1sts took 6 points from their double weekend, with home wins over Corinthians and Glenanne. It means the lads have won 5 games from 6 and taken 16 points from the 18 on offer, an effort which leaves them 3 points clear at the top of the table. Goals were shared between Alan Sothern (4 over the weekend), Mick O’Connor, Maurice Elliott and Karl Lynch. Paddy Conlon’s men take on Annadale in Serpentine Ave at 2.15pm in the Irish Senior Cup, lets see some support for the lads on Saturday.

The Ladies 3rds, 4ths, 5ths also picked up wins – Rachel McGrath’s 20th minute goal gave the 3rds their second win on the trot, while it was a great start for Mossie’s Ladies 4ths, picking up a win on the road in their first game against Our Ladies. The Ladies 1sts had a tough afternoon out in Loreto Beaufort – they held Loreto 0-0 at half time, but Loreto netted 3 second half corners to take the full 3 points. The girls face Old Alex at home this weekend at 12.30pm. The Ladies 7ths had a very useful 2-2 draw out in Malahide / Fingal while the 8ths will be looking for their first points of the campaign this weekend after loosing away in Navan.

Send your news items to web@pembrokewanderers.ie