There was a great turn out in the club, from past and present members, on Thursday to celebrate Ronan Gormley’s 100 Irish Caps. He had reached this target in June 2010 but due to Ronan now playing his club hockey with Club de Campo in Spain, the logistics did not allow for a presentation before now. Ronan is the first member of Pembroke to reach this milestone. 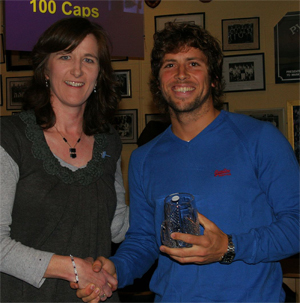 The Club President, Deirdre Mackay spoke about Ronan’s Irish career which has spanned from his first cap vs. India in 2004 up to the present day. This included competing in two World Cup qualifiers and one Olympic Qualifier, winning the European Trophy in 2009 in Wrexham and the Celtic Cup three years in a row from 2007-2010. He has also been Irish captain since 2008. Deirdre complemented him on also making a great contribution to Pembroke’s achievements over the last ten years with five National League titles, three Irish Senior Cup medals and being part of the team which lifted the Euro Nations Trophy, held in Pembroke in Easter 2009.  After receiving a Dublin Crystal Tumbler to commemorate the occasion Ronan thanked everyone who was there and assured us that he will be returning to play in Pembroke one day, and said he was looking forward to his match vs. Pembroke in the KO16 of the EHL on April 22nd in Bloomendaal.