This was a match watched by a large crowd, on a lovely early Winter Afternoon.
The teams, separated by only 2 points at the beginning of the day, were both a combination of experience and youthful exuberance.

Annadale pushed back and the opening few minutes were even. Gradually Pembroke eased their way into the game and quick interpassing between Elliott, Sothern and finally Elliott again saw Pembroke take the lead in the 4th minute. In the 11th minute Sothern reversed over the bar. A green card to Elliott, the first of three for Pembroke, saw a 2 minute suspension. The end of the Quarter the score remained 1-0 to Pembroke. Annadale had defended well and managed occasional sorties into the Pembroke 22 but nothing resulted.

The opening minute of the 2nd Quarter saw the first of 6 Penalty Corners to Annadale but all were cleared. Just afterwards a long ball saw an Annadale shot from the edge of the circle and the keeper’s kick was deflected off a Pembroke player to Andrew Williamson to force over the line for the equaliser. The half time score remained 1-1.

Annadale had two penalty corners in succession midway through the 3rd Quarter and from the second a penalty stroke emerged following a save off a foot on the line which Hamilton converted low to the ‘keepers left. This made it 2-1 to Annadale at the end of the 3rdQuarter. Their defence and midfield had absorbed anything that Pembroke tried and increasingly Pembroke chose to run rather than pass their way through a resolute defence with Moore, Smyth and Hamilton to the fore.

In the last Quarter started with another penalty corner to Annadale which was again cleared. Pembroke continued to press and finally in the 31st minute a shot was blocked on the line. The resulting stroke was coolly converted by Alan Sothern to make it 2-2.

The final minutes of the game saw plenty of action!
Pembroke twice left with ‘keeper Williamson completely exposed. Whilst he was equal to the challenge of at least two counter attacks finally, in the 33 and 34th minutes, International Caruth took him on and netted twice to ensure an Annadale win and to deny a losing bonus point to Pembroke.

Full IHL roundup »
Despite the loss on Saturday Pembroke still have it all to play for, with only 1 point separating the top 4 teams. The top 2 teams in each Pool will go through to the IHL Finals next May.

Ladies Roundup
The Ladies 7ths continued their unbeaten streak, with a 2-2 draw on Saturday against Railway, they lie in 2nd place in Div 9. The Ladies 6ths had a great Cup win away to Clontarf late on Saturday evening, a super result for Roisin Watson’s Darina Errity’s girls. The 3rds fought back for a draw against a very useful Trinity 2nds side, Fiona Keenan picking up the goal following a surging run from Lorraine Horgan. The 8ths faced a tough Cup date away to Newbridge and lost out 2-0.

IHA Player Survey
The IHA are running a Player Participation Survey – The IHA wants to take the information from this survey and use it to make our sport better and stronger so it’s very important to hear your honest opinion. Please click here » to complete the survey.

Match reports & Photos
Captains, it’s up to you to spread the word about your team this season. Send us your match reports, photos and stories and we’ll do the rest!
web@pembrokewanderers.ie 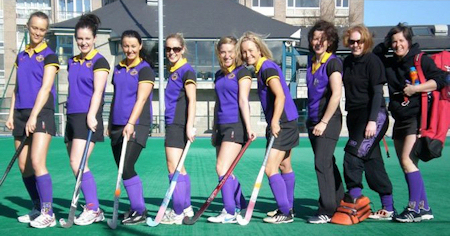 The Ladies 7ths remain unbeaten this season, following their 2-2 draw on Saturday